Today I met my MS Neurologist.  It was re-confirmed I have RRMS - or relapsing-remitting Multiple Sclerosis.  It means, for now, the relapses will come and go.  There will be good times and bad.

It was a surreal moment - sitting there in the waiting room - only steps away from my (old) workplace.  Colleagues were racing too and fro, and I sat there, hiding behind a magazine, not wanting any encounters in the MS waiting room.  This place that has been so familiar through work for so many years now seemed so distant and scary.

When my name was finally called - after waiting over an hour - I had a full work up and Neuro exam - over an hour with the Resident.  Then came in Dr. MS - he was fitting me in as a favour, seeing as we both work in Neurology.  He was amazing.  We looked at my MRI - he showed me each and every lesion, describing it to me as if it was not something gross and horrific.  We then talked medication - all the fun-ness of self-injection.  He gave me a ton of reading material to take home, and then... he offered me a spot on his clinical trial.  It is comparing a tried and true MS drug (injected 3 times a week, for the oh-so-low-cost of $30,000 a year - thank God for extended health insurance) and a new state of the art brain-child-drug.  There are risks involved, of course, but huge potential benefits too.

I go back to meet the nurse and learn more on Tuesday.  Until then - I have a LOT to think about and some BIG decisions to make.

Meanwhile - I am going to have another MRI done - to image my spinal cord to see if it has been affected yet.  And I need a whole whack of blood tests - some even get sent to Japan to test for a rare MS gene.

Perhaps the most poignant moment though, came right as I was waiting for the elevator to leave.  A man who had been in the MS clinic too started talking to me.  He turned to me and said "how come you can still walk?"  I didn't know what to say.  I could see his left leg was limping and he could hardly walk.  I told him I was just diagnosed and this was brand new to me.  I was expecting him to tell me he's been battling for 10 or 20 years, considering the damage that was already visible.  He turned to me and said "that was me a year ago.  I have had MS for a year."  That moment -  that sad yet heartfelt moment - made me understand exactly how real this is.  This is a fight.  A fight with one's own body.  And a fight we have no choice but to accept.
Posted by Sarah Le Huray at 20:24 1 comment: 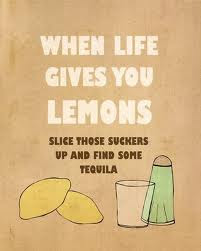 The end of summer brings catching up with friends, telling tales of warm adventures and work-escapes.  Tonight I saw an acquaintance who was telling me all his exciting summer news... a baby on the way, a new job, a new home.  When he looked at me and said "and what's new with you?" I didn't know what to say.  My insides felt like screaming "I HAVE MS, and it sucks," but I didn't.  I nodded along to his stories, happy for him.  But inside, I was wishing it was me who had happy, exciting news.  Something to be proud of, something to be excited for.  Instead, I get to be excited that I have a Neurologist appointment this week, that I get to start discussing meds and learning how to inject myself.  I get to think about MRIs and drug side-effects and when this blasted disease will strike again.

J starts Kindergarten next week, and as excited I am about full-time school, I am also a little nostalgic about our last 5 years together.  This is the start of many years to come - his education...perhaps the start of his occupation.  His life.  I want to be excited for him, I want to encourage him, and be there for him in everything he chooses to do.  But I worry this sense of "it's not fair" is going to take a greater hold on me than I want.

Although those feelings are not just going to disappear, perhaps I can shove them in my back pocket for a while.

I need to get proactive.  Even if I need to spell it out to myself every single day.

This is my first week being a full-time Mom.  Of two very busy boys.  Crazy how the universe decided it would also be the week I'd be diagnosed with MS and my life would go into an emotional frenzy.

My energy is down, the motivation is lacking.  There have been far too many trips for Timbit bribes to keep the boys quiet.  I feel like I need to sit and be alone with my thoughts for a week.  I need to pour over every detail of what I am feeling, write it all down - word by word.  I need to nap.  I need to savour a quiet cup of coffee with my journal.

I don't know why my boys are stressing me out so much,  They are familiar creatures to me - I know their habits, their schedules, their breaking-points.  They are like extensions of me.  But I feel like I cannot concentrate on their needs and my own right now.  After the zillionth "I'm thirrrrrrsty!" or living room wrestling match-turned-injury, my patience snaps and I find myself wishing I was alone on a deserted beach somewhere.

Then I begin to wonder if I should explain to my oldest, who is 5, what is going on.  How does that conversation go?  "Mommy has something wrong with her brain and you need to stop stressing her out!"

Life with kids is constant and I wonder how long it will take before my relationship with them feels "normal" again?  When I feel I can stop thinking about this shitty MS and start thinking about them?  Kindergarten starts in a week - I'll only have one to contend with then (at least from 9-3!).

Until then - Medication?  Wine?  Babysitters?  All of the above, I think.

An MS diagnosis can be a waiting game.  Symptoms can be around for years with no diagnosis or even an explanation.  And that is how it began for me.  Three years ago I had what was thought to be an odd reaction to a flu shot.  It was an incredible autoimmune response within my body that caused tingling and numbness in my arms and legs – it lasted over a month.  I went for Neuro-consults, but because it was my first episode of neurological symptoms, it was brushed off as “one of those thing.”  Eventually, the symptoms went away, and I forgot about it.  It was just one of those things.


This summer, while vacationing in the , I lost about 70% of vision in my right eye.  First it went kind of blurry (stress, perhaps?  That’s what everyone liked to tell me), then the colour contrast started to go, and then I could barely see.  I saw an ophthalmologist in , who diagnosed it as optic neuritis.  Slowly my vision returned, and is now at about 95%.  I have lost some red perception, and there is permanent vision loss, but for the most part, I am lucky.


Once this memory-inquisition begins, 2 and 2 start equalling 4.  Signs.  Symptoms.  Then you go see a Neurologist.  I was told before I even had the MRI that this was probably MS.  There are few other things that these symptoms would be indicative of.  In order for MS to be considered, there need to be 2 neurological attacks, separated in time.  Hmmm… Check.  Classic symptoms?  Check.  Then they look at the demographics usually involved in diagnosis.  Female?  Check.  Age between 30-50?  Check.  Of Northern European descent?  Check.  Light hair and light eyes?  Check.  For once in my life, I was not a medical mystery.  I could check all the boxes.


So, off I went for my MRI.  Thank God I have worked in Neurology for the past 7 years and have some wonderful, caring colleagues who like to help.   Within a week I had my MRI and had my results.  It’s a moment I will never forget…


“There are more than 10 lesions on your brain.”


This MS has been around for a while.  These lesions can be hard to pick up via MRI unless they’ve had time to develop.  That being said – lesions can be present without physical symptoms.  So who knows how long this has been within me – what else it’s caused?  MS can cause balance and coordination problems…. So did it factor into my broken ankle earlier this year?  Who knows.  No one will ever know.  It’s a waiting game, this disease – there is no way to predict what will happen next, or when.  It’s a Catch-22 – of the least fun kind.
Posted by Sarah Le Huray at 08:23 2 comments:

Definitions, rules, and the ugly cry

Now that "the big reveal" has happened, so does the influx of emotion.  Face-to-face encounters over the past days have been prefaced hurriedly by my shouting "NO tears, NO hugging!"  Normally I love a good cry and an even better hug, but Sarah-with-the-ugly-cry has surfaced, and she ain't pretty.  She does much better in private.  And sometimes, that is how this process is going to have to work for me - at least for now.  Sure - I am writing about this, and sharing it with whomever cares to read it.  But my lovely Samsung laptop provides the best invisible layer of protection that stops the ugliness in me from materializing.

But please, don't pretend this isn't happening to me.  Don't tell me "I'll get used to it."  Tell me a joke (reducing stress is key!), take me out, write me an email, tell me what's going on in your life.  MS rule #1: no treading on eggshells - talk to me, ask me things.  MS rule number #2: please refrain from the "at least it's not cancer" ideology.  I do, of course, understand that this could be a lot worse.  But also, this was not something I was high-fiving my pals about.  "Yes!  I have MS!"

There will always be something worse, for each and every one of us.  Always.

If you want to read more about the lovely goings-on of MS, this is for you:

I saw the lesions on the MRI before the doctor could start pointing them out, and I knew exactly what it meant.  MS.  Multiple Sclerosis.

Life is surreal sometimes.  For just a moment - just that one moment - you are allowed to leave your body, try and take it all in - take a deep breath - and then return.

When you see your brain, amplified by light and imaged into sections, you turn sort of numb.  "It's not really my brain" you think.  But alas, it is.  And there they are - those little bean-shaped lesions.  Waiting to kick into full-MS-mode.

And then what?  Cry, scream, freak-out, pretend there is nothing wrong.  Yup - all of the above.

But then, a day or two passes, and it's time to figure this thing out.  This "Jumanji-disease" - this uncontrollable gambling-game dysfunction that likes to strike when unexpected.  It prefers females, usually 30-40.  Usually young Moms.  Just like me.  He's (I have decided that MS must be male) a fickle one.

So now, the journey begins.  And I have no choice but to fight it.

"We don't know how strong we are until being strong is the only choice we have."
Posted by Sarah Le Huray at 21:10 2 comments: