It's been a summer full of change.

Big changes for us all.

We moved to a new house in a new neighbourhood and have spent the time settling in.  It's so nice to have the extra space for the boys and a huge yard for a beautiful garden.  I am grateful for that.

My Ocrevus infusion back in January has officially been deemed unsuccessful, so I was left with the decision of which medication to go on next.  There are only a few options left. The one that is brand new and shows a lot of promise is another mega-drug which obliterates the immune system.  Similar to the infusion I had.  It terrifies me.

It's hard to make this decision. The mega-drugs don't seem to agree with my body.  I felt horrible for 6 months after the infusion until it started to wear off.  And I had pinned all my hopes on it.  It was going to make me feel better.

In fact it made things physically worse, and my MRI showed new disease activity too, including my brain stem.

So, after a summer of no medications, today I finally conceded and filled my prescription to go back on my daily injections (again).  They are ruining my skin and aren't strong enough for my MS, but right now I need something I can live with that doesn't leave me in bed for weeks.

I'd give anything to make it a pill or an infusion, but alas, not meant to be right now.

And to be honest, I don't know if this is the right decision.  But it's a decision, and I needed to make one. The proverbial band-aid had to be ripped off, and today was the day.

And now we move forward.  With fingers crossed. 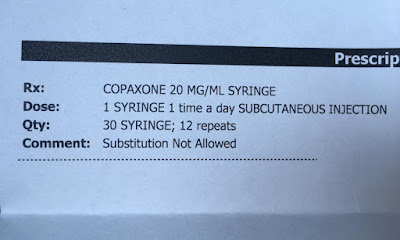